My topic today is Cutting Horses. And no, I’m not talking knives and blood. (Smile)

Cutting horses are the elite athletes and performers of the Western riding world. Highly trained, fast and nimble, they excel at an important ranching task. In the old West, cattle roamed the range and were usually rounded up twice a year for various purposes, such as branding, vaccinating and castrating. The cowboys also sorted out animals from neighboring ranches that had become mixed together.

Cattle are herd animals, unused to being handled, and do not like to be separated from each other. You can’t just walk into a herd and lead a cow out. Instead you need to isolate the animal so you can rope it and get it under control, or send it into a different pen or herd. They tend to be quite uncooperative about this procedure.

This is where the cutting horse comes in. In addition to being trained to make quick dashes, sliding stops and spinning turns, successful cutters have a quality known as cow sense. They have an uncanny ability to “read” a cow and anticipate its next move. Once their rider has shown them the cow he or she wants, the horse will move it out of the herd and keep it from going back, no matter how hard it tries to return.

Cutting horse competitions grew out of this work and are hugely popular with Western riders. While any breed can 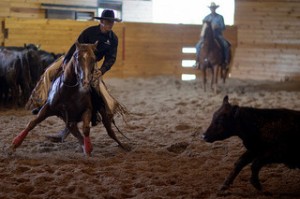 compete, most are Quarter Horses specifically bred for the job. A small group of cattle is let into the arena and a couple of riders keep it together. A competitor walks his horse into the herd and separates out a cow. His horse watches the animal and counters every attempt to return to its friends. After less than a minute, the rider stops and turns back to select another cow and repeats the procedure. The ideal is to cut three animals in two and half minutes. A good cutter really enjoys its job and is a delight to watch.

Here’s an excerpt from my book Wyoming Escape that describes a cutting demonstration:

The last team missed their cow and left to sound of good-natured teasing. A few minutes later a small herd of cattle was let into the arena and two of the wranglers kept them grouped together.

“Guess you’re right.” He took off his hat, smoothed his hair and resettled the Stetson firmly on his head. Loping to the far end, he entered the pen and brought his horse down to an easy jog while approaching the cattle.

“What’s he going to do?” Mikela asked.

As he drew closer, Shawn switched to a walk, studying the restless animals. Slowly and quietly, he headed Cherokee into the bunch, weaving through them. He seemed to find what he wanted and began to herd a cow with a bald face and a big white splotch on her back out of the group and into the open. The heifer suddenly realized she was alone, spun around and attempted to return to her companions. The colorful horse whirled and blocked her way.

The cow trotted to the side and again tried to dash back to the herd and again the paint stopped her. When she bolted in the opposite direction, Cherokee was right beside her, sliding to a stop and crouching as she put on the brakes. He stayed crouched, watching her intently. Each time she spun, trying to evade him, he swung around to meet her.

“Wowee!” Pepper exclaimed. “I wish I rode that well. That horse is so quick, I’d be grabbing horn and hanging on for dear life.”

Mikela watched in fascination. Cherokee seemed to be doing everything on his own. Shawn sat still in the saddle, his reins sagging, and did nothing visible. The bald face cow again charged for the side of the arena. The paint kept pace, slid to a stop, blocking her, then spun around to follow as she dashed the opposite direction. Sprinting after her, he stumbled and pitched forward slightly. The trip caught Shawn by surprise and he briefly lost his balance, jerked sideways and quickly recovered. After several more attempts, the heifer appeared to give up and stood panting. Shawn picked up the reins and turned his horse away, while the crowd yelled and applauded, wanting more.

If you want to see cutters in action, here are a couple of YouTube videos:

The Thrill of Cutting:  http://www.youtube.com/watch?v=FlnZ5roGPF4