Horses are Characters, too…

Posted on November 3, 2013 by katewyland

Today my guest JoAnn Smith Ainsworth talks about a very special animal that helped her through a difficult time in her life.

When JoAnn Smith Ainsworth carried wood as a pre-teen so her Great Aunt Martha could stoke up the iron stove to prepare dinner, she wasn’t thinking, “I could use this in a novel someday.” Yet, the skills she learned from her horse-and-buggy ancestors translate into backdrops for her historical romance and paranormal suspense novels.

Her most recent release is Polite Enemies, published by Whiskey Creek Press and available as an ebook too. Here’s JoAnn.

POLITE ENEMIES features a farm horse, Old Molly, who appears in many high-profile scenes. In 1895 Wyoming, Old Molly thwarts outlaws, hauls equipment to fight a fire and, notwithstanding exhaustion, comes out of the barn one more time for the heroine to defend her hero. Old Molly has a personality that makes her one of the story characters.

Old Molly has been with the family for over a decade. Whether called upon to pull a plow or haul a load of farm produce to town, Old Molly placidly does her duty. The hero is a rancher so there are other, more powerful horses in the novel, but none of those horses have the personality and importance of this tried-and-true farm horse.

Incorporating a horse with a “personality” into POLITE ENEMIES came from my own experiences as a horse owner. I owned a horse for a few years and he played a central role in my life.

Sensacional was a Peruvian Paso with dark coloring, an almost-to-the-ground, black tail and a flowing, black mane. He had a very smooth, specialized gait, (which looked like this horse ridden

by my trainer, Silvano Taipe). Sensacional played a major role in helping me survive the transition of my son from a dependent child into an antagonistic teenager and, finally, into an independent young man. I had to learn to step away, to give my son enough space so he could grow. Sensacional was the “crutch” that helped me through the transition. He kept me from a mother’s despair as her child pulls away from her.

Sensacional was a rescue horse. In a way, we rescued each other. He was a beautifully trained gelding with quality features, but his owner died suddenly. Those family members dealing with a human death forgot about the horse. Not being fed and watered, Sensacional went to skin and bones. By the time I got him, he was too weak to carry a person. The trainer spent a few months to fatten him up and rebuild muscle tone. We took long walks together while Sensacional was unable to carry weight.

I would speak to him as we walked and he seemed to understand and accept the bond of mutual need being built. Although he was a show horse at one time, I wanted him for trail rides on a Napa County recreational ranch. Peruvian Pasos can cover miles with ease and provide a smooth ride because of their gait. As Sensacional responded to food and exercise and companionship, we became closer. Eventually, he was fit for trail rides.

My mothering instinct traveled from my son to my horse. Where my son rejected fussing and care, Sensacional loved being coddled and groomed. The horses in POLITE ENEMIES benefitted from my experience.

As is the nature of things, during this time my son and I became more estranged, but Sensacional took the sting out of it. It took my son into his early twenties to return to a belief that parents might have some value in this world. It took Sensacional less than a year to return to his original beauty and most of his strength, but the starvation had taken a toll on his health and shortened his life span. Sensacional neared the end of his days and passed out of my life at a time when my son reached his maturity and eventually came to believe a mother might be worth acknowledging once again.

Have you ever had an animal which helped you over hard emotional times? Describe your experiences for us. 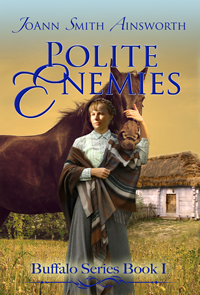 IDA LOUISE OSTERBACH survived Indian and range wars and the murder of her husband. She’s kept the farm going through sheer grit and the help of her cousin, a friend and two farm hands. She’s managed a profit, paid the mortgage and re-paid the crop loans. Hard working, focused, fiercely proprietary, the last thing she has time for is romance.

JARED BUELL—widower neighbor and wealthy rancher—was never particularly charitable when it came to farmers, even eye-catching ones like Ida. He’s not looking to start trouble or anything else with her. His comfortable existence needs no complications, thank you very much. Then an old nemesis comes to town and threatens his and Ida’s property. He has no choice but to get involved.

Experience this action-packed romp through 1895 Wyoming where an outlaw schemes to take over the town and Ida and Jared find love when they least expect it.

Read an excerpt at http://bit.ly/1epn2aM.

13 thoughts on “Horses are Characters, too…”