Snakes and Alligators and Frogs, Oh My!

Ever had an alligator for a pet? How about a boa constrictor? My guest Susan Muller has had both and today she’s going to relate some of her adventures with exotic animals. Where do frogs fit into the picture? You’ll just have to read on to find out.

Susan C. Muller is a fourth generation Texan who started her first novel at age eleven, but life got in the way and it wasn’t until many years later that she returned to that first love, writing.  Her novel, The Secrets on Forest Bend, has won several awards. The Witch on Twisted Oak was released in August, 2013, Voodoo on Bayou Lafonte in January, 2014, and Circle of Redemption in May, 2014.

She enjoys speaking to book clubs and writer’s groups and serves as president of her local RWA chapter.

Take it away Susan.

Sorry, Kate, I’ve never owned a horse. But being from Texas I have been around them from time to time. I’ve even ridden a few. Of course, I always wanted one, but the expense, not to mention the time and effort, prevented me.

I have owned pets, though. And I’m not just talking dogs or cats, although I’ve had plenty of those. I don’t know what it is about boys–my daughter only had hamsters, gerbils, and kitties—but my son had a turtle named Mr. Turtle Green and a gold fish called Chicken Leg. I only realized last year that the poor fish got that name because he resembled, you guessed it, a chicken leg. Don’t know why it took me forty years to figure that out.

Later, my son got a baby alligator. Of course, alligators only eat live food. During the summer, my son held the flashlight while I caught teeny, tiny frogs and Al, the alligator, snapped them up. As the weather got cooler, the frogs grew too big and I had to improvise. I took a small cube of ground meet, tied a string around it, and jiggled it up and down in front of Al. After he clamped down on it, I had to get scissors and snip off the string hanging from the side of his mouth.

Later, as my son got older and Al had gone into hibernation for the last time, he talked his grandfather into buying him a boa constrictor. We named the snake Hercules because he was so strong. Snakes also only eat live food; generally white mice

Not all pet stores carry white mice or, even if they do, don’t necessarily have them when needed. So we got a large aquarium, put a cover on it, and bought two or three mice at a time.

Do you know what happens when you put two or three mice together? You get six or seven mice, and then twelve or fifteen. Many more mice than Hercules could eat in a month.

Hercules may have been strong, but he wasn’t the smartest snake in the world. The first time he tried to catch a mouse, he missed, injuring the roof of his mouth. Have you ever tried to find a vet who treats snakes? For a week, we had to swab the inside of his mouth with some stinky concoction. This was a two person job. My son held Herc, as we called him, and I swabbed with a Q-tip. 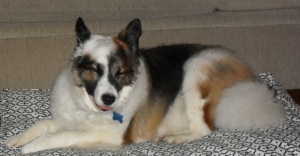 There have been many other pets over the years: a Great Dane and a Shih Tzu who were best friends, an Irish Setter who stole golf clubs and brought them home, a Weimaraner who got on the counter and ate only my regular cookies, forgoing my husband’s sugar-free ones, and a cat who roamed the neighborhood on garbage day, knocking the lids off cans until we had to buy several neighbors new cans with locking lids.

As I think about it, I might have saved money with a horse.

But, of all animals, I love dogs the best. When I needed someone to discover a body in my novel, The Witch on Twisted Oak, I picked a Border Collie. I even put the opening scene in her point of view. I thought I had come up with a brilliant new idea. Later I read Robert Crais’s best seller, Suspect, and realized there’s nothing new in the world.

Molly was only supposed to be in the first scene, but I fell in love with her and she became a major character in the story. Here’s an excerpt from The Witch on Twisted Oak featuring Molly and a cat named Bob who may or may not be a witch’s familiar.

Do you have a dog, or a cat, or a horse, or any other fur baby you love? 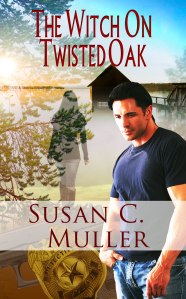 A powerful psychic is brutally murdered.  Secrets are revealed.  An old enemy is out for revenge.

Detective Ruben Marquez is thrust back into his childhood memories when he investigates a gruesome murder that occurs only feet from his mother’s home.  Is the killer somehow connected to his own past?  Is the beautiful, mysterious daughter of the victim, someone he can trust?  Or is her revelation that she’s a witch a sign he should stay clear.  But how can he, when it appears she’s next on the murderer’s to-do list.

In the ultimate test of courage, he uses himself as bait to protect all he holds dear . . . his career, his family, and the Witch on Twisted Oak.

Molly had spent fifteen minutes searching for Bob (a cat) and never figured out he was hiding behind a curtain. She had finally given up and made do with checking out the litter box. She watched Ruben with innocent eyes, but a pyramid of kitty litter sat on top of her nose.

Mamacita stuck her head out of the bedroom door. “I’m going to bed now. I’ll see you in the morning.”

Tessa stepped out of the bathroom, her face damp and shiny clean, the last traces of make-up removed. Although why she bothered to wear any with that skin he wasn’t sure.

“Could you wait a few minutes?” she asked Mamacita. “I’d like to feed Bob in there where he won’t be worried about the dog. And he won’t eat if there’s anyone around.”

Ruben almost cheered. He couldn’t have arranged things any better. It was almost worth having the cat around. Almost.

It took ten minutes and the efforts of both he and Tessa to convince Bob to stay in the bedroom and Molly to stay out of it. The dog lay with her litter covered nose pressed against the one inch gap at the bottom of the door, occasionally letting out a pathetic wine.

Mamacita scooted as far down the sofa, away from Tessa, as she could get. The only difference in her actions and the cat’s was that her claws hadn’t come out. He looked again. Well, maybe they had.