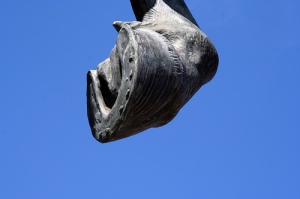 There’s an old rhyme we’ve all heard as kids.

The poem is meant to show that small actions can result in large consequences. It also illustrates a basic fact of horse keeping: without proper hoof care, you can’t use a horse.

A hoof is essentially a long toe (or three fused together, to be exact). The outer wall is like a very thick toenail that wraps most of the way around the inner structures—soft tissues, ligaments, and bones. The sole of the foot is also made up of a fingernail-like material that is softer than the wall. It covers most of the bottom of the hoof except where the frog is located. The frog is a V-shaped, rubbery structure that acts as a shock absorber. In a wild horse that casually roams over varied natural terrain these parts of the hoof become hard and tough.

In contrast, domesticated horses that are kept in stalls, used on man-made surfaces such as stone, concrete and asphalt, and are asked to carry weight or pull heavy loads usually need protection for their hooves. In addition, man, through selective breeding, has greatly modified the horse, oft times creating a creature that would have no hope of surviving in the wild. Hence the invention of horseshoes and the development of the craft of the farrier or horseshoer.

Up until the Middle Ages, the distance a horse could travel was limited by how well its hooves stood up to the wear and tear of the load and the surface it was traveling on. Men tried different methods to attempt to protect the hooves, including the Roman hipposandal, a hard leather contraption they strapped on, but none were particularly successful. It wasn’t until sometime in the early Middle Ages that they began to work iron and bronze into horseshoes which they nailed on through the thick outer wall. Suddenly, horses could go much greater distances, which increased travel and trade. 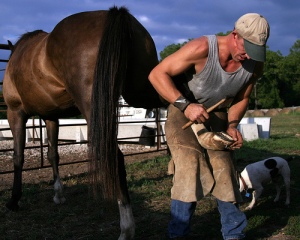 When the farrier comes, he first pulls the old shoes, if any. Then he trims the hooves to make them level and even. Like fingernails, hooves grow and can be worn into lopsided patterns, so it’s important to rebalance the foot before putting on the new shoes. Just like people, horses feet are different shapes and sizes and the shoes need to be fitted to them.

Horseshoes can be worked in two ways—either by pounding a (cold) shoe that almost fits into the correct shape or by heating the shoe and reworking it to fit. If the foot is normal with no problems, cold shoeing is easiest. However, if either the type of work or physical problems demand something extra, then hot shoeing is the way to go.

Farriers have to study horse anatomy and physiology because they also deal with diseased and injured hooves that may require special shoeing. Laminitis and Navicular Disease are two problems that require long term, knowledgeable care. My husband’s horse, Koko, had a long ordeal with laminitis. Without our excellent shoer, we would have had to put her down much sooner. A good farrier is hard to find and important to keep.

No hoof, no horse.