Today I’m interviewing Ally Shields, author of the Guardian Witch series. Her most recent release is Fire Storm, book five in her paranormal urban fantasy set. We’re having fun with some serious and not so serious questions.

If you were an animal, what kind would you be?

This is an easy one. I’d love to be a horse, a wild one that ran free in the American West when there were no fences. I think they are the most spectacular animals on earth, and there is nothing more beautiful than to watch them run.
I couldn’t agree more.

What books would you take with you to a desert island?

Tolkien’s Trilogy, a stack of Georgette Heyer’s regency romances, a pile of Agatha Christies, and JD Robb’s Eve Dallas series. I’d still run out quickly, so I hope I would get rescued in the first week or two.

What prompted you to write your book?

I started out to write a traditional mystery, but soon realized my heroine was a witch. I had read several paranormals just before that but couldn’t find any new ones I hadn’t read. So I wrote Awakening the Fire (Guardian Witch Book 1) because that’s what I wanted to read. I kept writing the series to find out what happened to Ari and Andreas and their friends. I never know exactly how a story is going to go until I write it.

What’s your favorite room in your house?

My office, which is the most creative place.

What is your writing process?

My stories always begin with the characters. Once I know my characters well, I can picture where they’d live and what kind of story they would get involved in; then I start writing and allow each character to tell me their part.

Do you have any unusual writing habits?

I don’t do anything weird like stand on my head or write in the nude, but I think we all have our quirks. I tend to be a slave-driver until the first draft is finished and maybe the first self-edit, then I begin to dawdle through the next few passes until I’m thoroughly sick of the story. It’s still hard to let it go, and every time I look at it I begin to “tweak,” changing a word here, a sentence there. Eventually I have to just say “enough” and hit the submit button.

Coffee or tea? Beer or wine? Sweet or tart?

Coffee, black. Wine, mostly red, but I won’t turn down a good white. I even like white Zin. Sweet definitely, but I also love the combination of sweet and tart.

What’s your next project?

I currently have two books in edit: Wild Fire (Guardian Witch 6) and Cross Keys (an elven urban fantasy), and I have just started the first draft of Circle of Fire, book 7, the final chapter in my Guardian Witch series. I’m already obsessing about saying goodbye to these characters.

What types of books do you like to read?

I read mysteries, urban fantasies, thrillers and romantic suspense. I also have a weakness for regency romances like those of Heyer that are full of humor and wit. Since I was recently in New Orleans, I’ve been indulging in New Orleans’ paranormals, especially those with ghosts!

Thanks for a fun interview! I’m looking forward to your next books.

Sometimes you just need to stay alive to fight another day.

Six months ago Ari moved in with the vampire prince Andreas. They defied the vampire elders in Europe, killed their enforcer, and have waited for retaliation that never came.

On a trip to Italy, Andreas is captured by the vampire rulers, the notorious O-Seven, and taken in chains to their stronghold in Germany. Ari goes after him, even though it’s against the orders of her Magic Council. She is fired for her actions, losing her special Guardian powers at a time she needs them most.

But the vampire rulers are not through with her or with those who attempt to help her. They launch attacks in Europe and at home in Riverdale. Ari is forced to fight them on several fronts, and victory grows increasingly uncertain.

Her last chance to rescue Andreas is a daring plan that places her in the hands of the O-Seven and relies on untested witch magic, the final hope for their survival.

“The scent stops here,” Ramon said. “They followed it to some kind of circle drawn on the ground, where it ended. To be certain, they’ve searched a half mile radius.”

Samuel and Ramon pulled back the brush, and the group entered the clearing. Ari drew back a step. An oppressive black aura, a dark thundercloud of haze, hung over the immediate area. She didn’t say anything, because the others couldn’t see it, but other remnants of the sorcery circle were obvious to all. The scent of sulfur, the ring of ashes. She moved forward to examine the ash used to draw the circle and recoiled in disgust. Human ashes. Not unexpected because the ability to teleport was produced by a dark arts spell. The most complex spells required a level of power typically achieved through human sacrifice or at least the use of human remains.

She stood and walked the circle. Sophistrina’s coven used black magic to teleport, but this wasn’t big enough to hold thirteen witches. This ring held no more than five or six creatures, and some of them had been werebears. And Sophistrina didn’t use human remains. At least not when Ari knew her.

The air at the edge of the circle shimmered. “Intruders,” she shouted. “Get out of here.” She leaped forward to protect her companions, throwing up a temporary barrier with the magic powder she always carried in her pockets. Lilith pulled both her guns; Samuel began to morph into tiger form, and the foxes snarled a warning, but backed away, ready to run.

Energy crackled, and as if Ari’s earlier thoughts had pulled them in, Sophistrina and her coven materialized outside the prior circle.

“Hold everything. It’s Sophistrina.” Ari thrust out a restraining hand to keep her companions from attacking, but she kept her eyes on the witches, waiting to see the coven’s mood. The last leader of this group had indeed tried to kill her. It paid to be cautious. Especially when they showed up at this particular spot.

“Why do you seem so surprised?” The high priestess smiled at her from the other side of the barrier and cocked her head to one side. “Didn’t you call me?”

You can find Ally’s books at the following online sites:

Posted on December 2, 2013 by katewyland 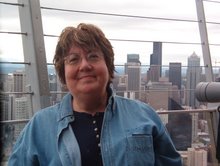 My guest today is Mitzi Flyte. Mitzi enjoys saying that she got her first writing rejection more than fifty years ago at the age of 12. (Now you know how old she is) That rejection didn’t stop her from writing. Even being a Registered Nurse didn’t stop her. Mitzi’s been published in short story and poetry anthologies and in the local newspaper. She also had an erotic novella published under a pen name (she was still employed at the time). Retired from nursing, Mitzi spends her time online and writing. And, oh, yeah, she’s returned to school to get a BA in Professional Writing. Mitzi lives in rural Pennsylvania with her husband and daughter who are also writers, an assortment of cats (not enough to be called “crazy”) and a dopey hound dog.

Before we get to Mitzi’s post, I’d like to put in a small promo for the Winter Wonderland Scavenger Hunt put on by Night Owl Reviews. A group of authors, including me, are offering gift baskets to lucky winners. Prizes include gift cards, signed books, eBooks, jewelry, swag and even a Kindle. This is your chance to find great authors and books and win something too. Visit their site and sign up.  http://www.nightowlreviews.com/v5/Pages/Articles/Winter-Wonderland-2013

“Who’s afraid of The Big Bad Wolf?”
“I’ll huff and I’ll puff and I’ll blow your house down.” 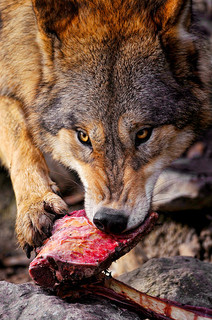 “My, Grandma, what big teeth you have…”
“All the better to eat you with…”

We grew up with these tales of wolves.

But are wolves really bad-actors?

Throughout history humans have feared the wolf because it is a large predator. At 100 pounds for a male and slightly less for a female, a wolf is about the size German Shepherd. They are usually a mottled gray in color but can be black, reddish brown and even white. They are pack predators that can and do target domestic herd animals such as goats and sheep. However, since records started being kept in the 1800s there has been no documented case of a healthy wolf attacking a human—any recorded attacks were by a rabid wolf or a wolf-dog hybrid. Wolves are naturally afraid of humans and tend to “disappear” into their surroundings when humans are nearby.

Throughout American history wolves have been feared by the farmer and rancher. Over the years that fear decimated the wolf population in North America, which is slowly returning. In parts of Europe wolves were hunted to extinction.

The wolf is a pack animal; the pack consists of an adult pair and their offspring. It takes a pack to raise the pups. The alpha pair may even “adopt” offspring of other wolves.

They have a wide area for hunting prey, are very territorial and will defend that territory to the death.

Humans have taught the wolf survival skills. During the 1800s when the bison were being exterminated by hunters, wolves learned to listen for the gunshots, wait until the bison was skinned and then they would go in to feed on the carcass. In more modern times when wolves were hunted from the air, they learned to avoid wide-open spaces when there was the sound of an airplane.

Once on the endangered lists, their numbers are growing; however, there continues to be a backlash against these animals. To learn more and to help in the preservation of wolves in the wild, go to:

Inescapably, the realization was being borne in upon my preconditioned mind that the centuries-old and universally accepted human concept of wolf character was a palpable lie… From this hour onward, I would go open-minded into the lupine world and learn to see and know the wolves, not for what they were supposed to be, but for what they actually were. 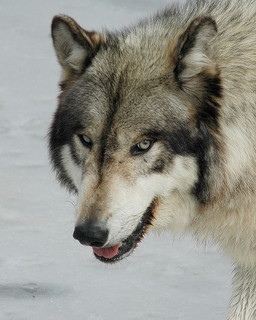 Zoologist Kate Riley has spent several days testifying before Congress about the effects of climate change on North American animals and returns home to help an investigation of an unusual death, possibly done by a wolf. Kate owns a wolf preserve in the Pennsylvania mountains and can account for each one in the preserve. Patrick Brendan, another specialist, is brought onto the case and believes that the killer may be more than just an animal.

As the death toll mounts, Kate finds herself being stalked by memories of a distant past and a chilling evil. She begins to doubt Brendan and her own scientific knowledge. Is the killer more than an animal? Is Brendan more than who he says he is? And why is she drawn to a man who could be a murderer?