Sex and the Single Horse

Due to attending the Emerald City Writer’s Conference in Seattle last weekend I’m recycling another early post. This one deals with how the sex of a horse influences how you deal with him or her. Next week I plan to get back to my regularly scheduled posts.

There is an old horseman’s saying: You can TELL a gelding what to do, you should ASK a mare and must NEGOTIATE with a stallion. Many people either are unaware of how important gender can be or think it doesn’t matter. This can interfere with them getting the best from their horses. 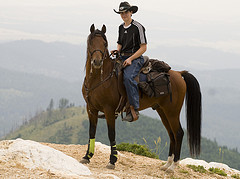 A gelding is a male horse that’s been neutered. As such, he’s no longer ruled by his hormones and tends to be more even tempered. Most are gelded when they are quite young and often remain “child-like” with a relaxed and playful attitude toward life. Of course, breed and personality influence things too. Some are bred to be hot and excited, such as the thoroughbred, and some are bred to be laid back and cooperative, such as draft horses. But in general, a gelding is easier to deal with.

Mares, on the other hand, are quite influenced by hormones. From early Spring to late Fall, they come into season about every 21 days unless impregnated. For some this is

a big deal and they can be unpleasant or irritating to deal with. Most just get a little touchy and distracted. And just like with people, when someone isn’t feeling their best or isn’t attentive, it’s not wise to try to force an issue. Also because of the biological imperative to have babies, mares tend to have a more serious attitude toward life. This means they can get insulted quite easily. That can provoke a sullen shutdown, fearful withdrawal or determined resistance depending on their personality. But their mothering instinct is also a big plus. They want to cooperate and please and most will try their hardest for you if you ask nicely. 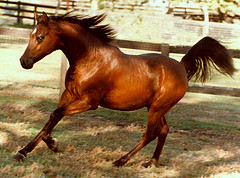 one purpose in life – to breed and protect their mares and babies.  They are the ultimate alpha males. As such they can be quite difficult to live with and that’s why most males are gelded. Given how powerful and determined they are, you don’t want to provoke a fight. It’s unlikely to end well. All horses need to be taught to respect and obey humans, and this is vitally important with a stallion. The scent of a mare in season can turn an untrained stud into a dangerous time bomb and be a potent distraction for the well-trained. So, you have to take into account the forces driving them and figure out how to negotiate their cooperation. The results can be spectacular.

Have you noticed or had experience with sex differences in any animals? If you’re into horses, which do you prefer?

12 thoughts on “Sex and the Single Horse”