Today my guest is Genene Valleau, writing as Genie Gabriel. Genie is an optimist whose rose-colored glasses have bent frames and cracked lenses. She writes about people who find courage and integrity in the darkest times of their lives, who rescue stray dogs and kittens, who find a person they would willingly give their lives for, and who make their little corners of the world a better place.

FREE BOOKS!
Genene is offering a free PDF copy of her most recent book, St. Batsy and the Time Machine, to 5 commenters!

These are some of the lessons my dogs have come to teach me. I’m working on the first three, but think I’ll leave the barking to my herd of doggies.

Fur against my face and the soft smell of a dog curled protectively around me existed before my first memories of this life. My mom used to tell stories of me as a toddler, sleeping with my head pillowed on our Collie’s belly.

I grew up on a farm, and we always had a dog. I wanted a horse too, but was in high school before my dad gave in to my begging to have one. Do you think you can become addicted to the smell of a horse? To this day, even the memory of that sweet aroma totally relaxes me.

However, after graduation, I moved to the city to claim a job and my own life. A back yard isn’t the best place for a horse, but I could indulge my love for dogs. A small, mixed breed Lady became the first beloved companion in my adult life. She tried to teach me to choose my relationships wisely. Ah, if only I had listened to her. An ill-fitting marriage ending in divorce turned my focus back to dogs as companions. 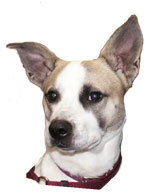 I was almost forty years old when I discovered the joy of shelter dogs and living with more than one canine. The more time I spent with dogs, the more I learned.

When I began writing, dogs naturally turned up in my stories. My first novel, published as The Rock Star, featured a dog who turns on the coffee maker for his mistress and has an attitude similar to my first shelter dog, a Border Collie mix.

Two of my romantic comedy novellas also feature dogs inspired by canines who have shared my life. My latest book to be released in print, St. Batzy & the Time Machine, features a terrier with a penchant for misadventures. His attitude is quite similar to my own terrier, who views fences as something to try to dig under, jump over, or wiggle through.

Dogs will definitely continue to be strong characters in my writing. In fact, I will soon be publishing a book about my journey with dogs and how they have guided me through traumas and brought me face to face with sometimes uncomfortable truths. However, underlying all their actions is pure, unconditional love and the support to make our most precious dreams a reality.

Oh yes, and to play–no barking needed on my part!

An eccentric inventor is determined to reclaim his wayward time machine and save his beloved wife from her latest misadventure. If only they can travel safely past the black hole…

When they were seated, he told Dorinda the story of how he and Maddie had met. How he loved her from the first moment, and never thought a woman as bold and brave would ever love him in return. “My Maddie still goes on grand adventures to change the world. I worry about her, but I’m so proud of her.”

Dorinda remained quiet for a few moments after Horace stopped talking, then said softly. “I would like to live in a world where there is plenty of food and women are allowed to follow their passions.”

In the next breath, she pushed out a sigh and stood. “’It is not productive to grumble about what cannot be. I will leave you to rest, and I have much to think about. Thank you for a look into the future. You have given me hope.”

“Let me accompany you back to the village.” Horace also rose.

However, Dorinda shook her head. “As an elfenchaun, I’ll be quite safe with the creatures of the forest.”

Still, Horace watched Dorinda from the entryway of the time machine until the trail of shimmering green faded into the night. Elfenchaun or not, he worried about the delicate creature who had shown him such kindness. Would she truly be forced to give up the life of relative freedom she had known and marry a man who would control her every move? He would not want to smother his Maddie’s bold spirit, even if it cost him days of worry when she was gone.

All the next day, Horace toiled under the watchful eye of Dorinda’s grandfather. As the light of day faded into twilight, the man shook Horace’s hand and presented him with a curved piece of metal to repair the time machine.

Though exhaustion threatened, the desire to return to the year 2011 and rescue his Maddie gave Horace the energy to drag the metal back through the forest and replace the damaged panel of the time machine.

As Horace gathered his tools and placed them back inside the time machine, he looked forward to seeing Maddie again. He walked the short distance to a small stream and splashed cool water over his face, any tiredness dripping away with the water that ran down his skin. Soon he would see his Maddie!

The short distance back to the time machine took only a few moments, yet Horace knew something was not as he left it. His steps slowed and he looked cautiously around, listening carefully for any clue to what might have happened in the moments he had been gone.

A moan near his feet was all that prevented him from stepping on a tiny crumpled body on the ground. “Dorinda?”

He bent over the little elfenchaun, stunned by the pallor of her face and the broken remnants of her iridescent wings. “What happened?”

“Over here! I saw her fly this way.” Strident shouts tore the peace of the night to tatters as lanterns bobbed closer and closer.

Adrenaline surged through Horace. As carefully as possible, he lifted Dorinda and carried her into the time machine. Laying her on a pad next to Batzy, Horace locked the door panel and started the sequence for the reactor. “Clement, can you give us a boost to get us out of here?”

“Thank the heavens!” Maddie appeared on the monitor beside Horace’s cousin.

Clement’s fingers flew over the computer keyboard. “What took you so long to make repairs?”

Print version of St. Batzy plus Genie’s other books on:  http://tinyurl.com/mozwtzd

13 thoughts on “My Therapist Barks”